Vancouver, B.C. – Northisle Copper and Gold Inc. (TSX-V:NCX)(“Northisle” or the “Company”) is pleased to announce  the completion of its initial drilling program on its Pemberton Hills Property located on Vancouver Island, in British Columbia. Northisle entered into a farm-out agreement with Freeport-McMoRan Mineral Properties Canada Inc. (“Freeport”) earlier this year.

As shown in the figure below, the program tested a 2,000 metre portion of the 3.5 by 1.5 km area of advanced argillic alteration located within the same geological terrain that extends west-northwest from BHP Billiton’s past producing Island Copper Mine. The alteration at Pemberton is very similar to that at the nearby Hushamu and Red Dog deposits and in porphyry copper systems found elsewhere in the world. 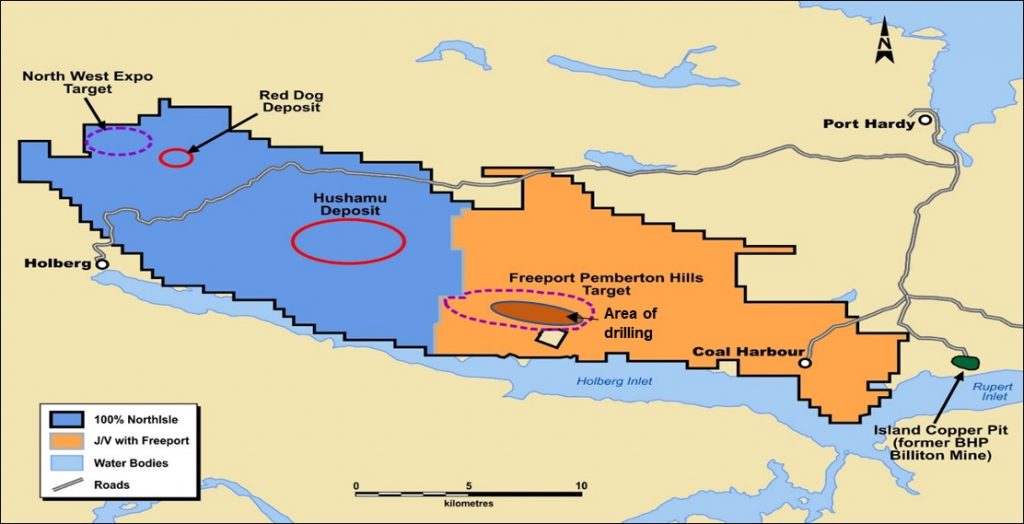 A total of 3,400 metres of drilling at 6 sites between 200 and 750 metres apart was completed. The furthest west of the successfully completed holes continued in advanced argillic alteration to its final depth of 700 metres. A drill hole located 350 metres to the north east of this hole intersected advanced argillic alteration until entering a weakly altered intrusive rock believed to be a dyke. This hole was stopped when it became apparent the hole may be drilling down the dip of the dyke. Two holes completed at the eastern end, approximately 750 metres from the other two holes, both cut faults that separated advanced argillically altered volcanic rocks above the fault from propylitically to weakly potassic altered granitic rocks; an alteration and rock type often occurring on the margin of porphyry copper deposits. Difficult drilling conditions resulted in only four of the holes reaching the targeted depth of 500 metres.

Once the analytical results are received, and in conjunction with this year’s geophysical and surface clay studies, the data will be analysed to define targets for a subsequent phase of exploration.

A farm-out agreement was entered into with Freeport earlier this year, dividing the initial property held by Northisle as illustrated in the figure above. Under the terms of the agreement, as announced on February 26, 2018, Freeport may, at its election, earn up to a 65% interest in the Pemberton Hills Property by funding a total of $23.9 million in exploration expenditures, while Northisle retains a 100% interest in its Hushamu and Red Dog copper-gold deposits and surrounding areas, for which a Preliminary Economic Assessment was published on September 13, 2017.