NorthIsle’s 100% owned North Island Project is located at the north end of Vancouver Island west of the town of Port Hardy B.C. The project consists of approximately 33,000 hectares of mineral claims covering a 50 by 8 kilometre area west northwest of BHP Billiton’s now closed Island Copper Mine. NorthIsle’s mineral titles cover most of a Mesozoic-age porphyry copper and gold district and hosts a number of porphyry copper and gold occurrences at varying stages of development. These include the advanced stage Hushamu deposit with a current NI 43-101 resource, the Red Dog Deposit with a historical resource, the early stage Pemberton Hills zone and the NW Expo mineralized zone. On September 13, 2017, a maiden Preliminary Economic Assessment (PEA) was announced. See news release. 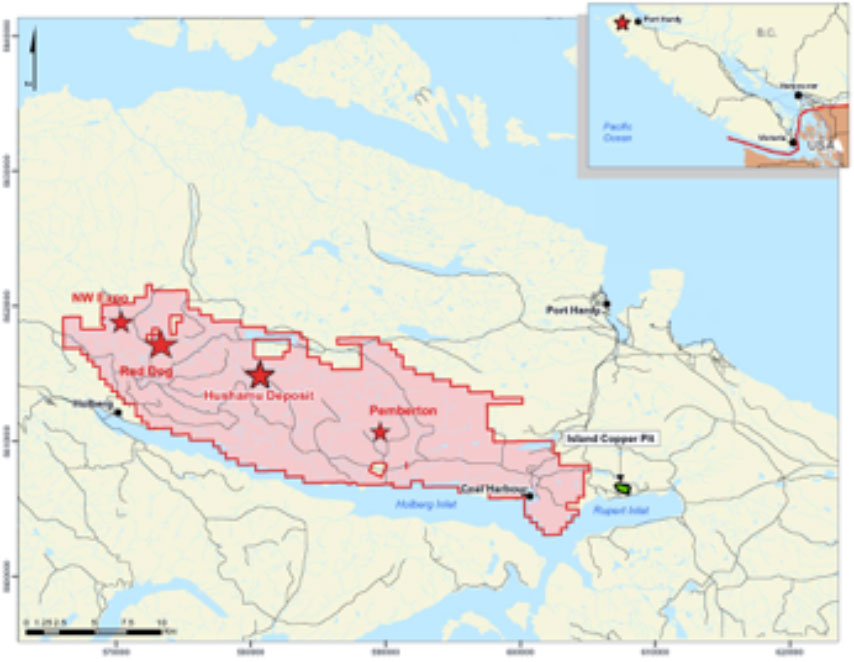 The nearby town of Port Hardy is a main distribution centre for the north end of Vancouver Island. It has an airport with 3 daily flights to Vancouver, a hospital, schools and a college. All parts of the North Island project are accessible from Port Hardy through a network of logging roads.

A marine load out structure and a hydro power line exist at the reclaimed Island Copper Mine. One of BC’s largest wind farm complexes is situated adjacent to the northwest end of the property and the power line connecting the wind farm to the main BC power grid passes immediately north of the North Island Project.

All scientific information contained on this website has been reviewed and approved by John McClintock P.Eng, President of NorthIsle Copper and Gold Inc. who is a “qualified person” as defined by National Instrument 43 – 101 of the Canadian Securities Administration.