Vancouver, B.C. – Northisle Copper and Gold Inc. Inc. (TSX-V:NCX)(“Northisle” or the “Company”) and Freeport-McMoRan Mineral Properties Canada Inc. (“Freeport”) have agreed to an initial work plan and budget for Northisle’s wholly-owned Pemberton Hills Property located on Vancouver Island, in British Columbia.  The program is being fully-funded by Freeport under a farm-out Option Agreement executed earlier this year and announced by the Company on February 26th, 2018.   Under the terms of the agreement, which are summarized at the end of this release, Freeport may earn an initial 49 per-cent interest in the Property by paying CAD50,000 cash to Northisle (paid) and funding a total of CAD4.0 million in exploration expenditures over three years.

The Pemberton Hills target is a 3.5 kilometre by 1.5 kilometre area of advanced argillic alteration located within the geological terrain that extends northwest from the past producing Island Copper Mine and in close proximity to the Company’s wholly-owned development-stage Hushamu and Red Dog copper-gold deposits (see attached map).

The up-coming work program will consist of approximately 10 Kilometres of Induced Polarization (IP) geophysical survey and three drill holes totaling approximately 1500 metres.  The estimated cost for the program is CAD 700,000. Subject to the receipt of permits, it is anticipated that the IP survey will begin in late June with drilling to begin in September once the IP survey is completed and the results interpreted.

John McClintock, President and CEO of Northisle states: “We look forward to getting back on the ground at Pemberton Hills with funding and technical support of Freeport.  Pemberton Hills is one of several early-stage exploration targets on our extensive property holdings in this impressive copper-gold district.” 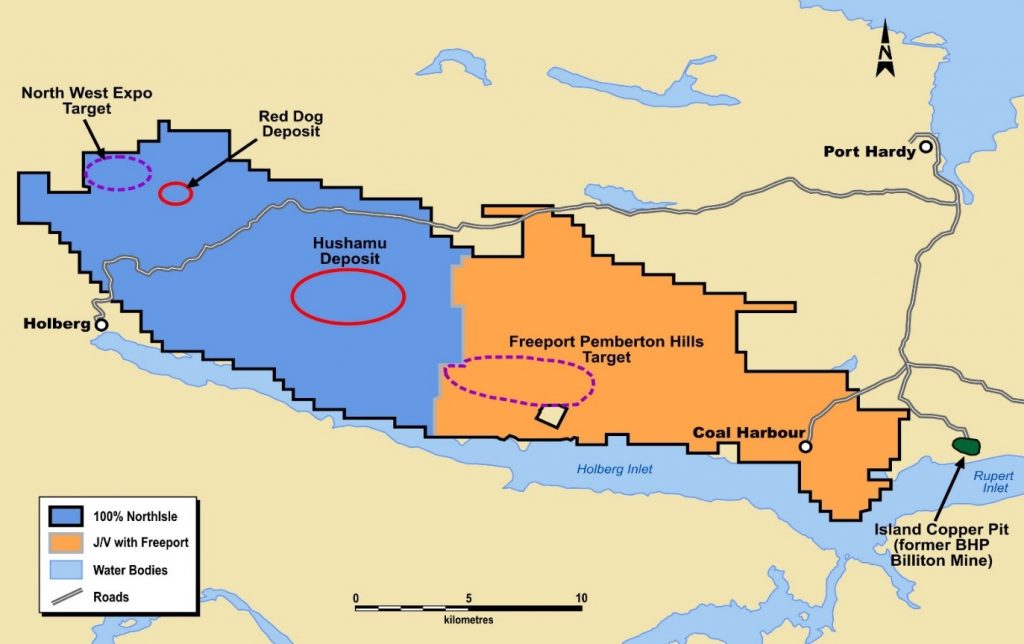 ABOUT THE NORTHISLE-FREEPORT FARM-OUT OPTION AGREEMENT

Under the terms of the Agreement announced by the Company on February 26th, 2018, Freeport may earn an initial 49 per-cent interest in the Property by paying CAD50,000 cash to Northisle (paid) and funding a total of CAD4.0 million in exploration expenditures over three years (the “First Option”).  The Agreement requires Freeport to commit to CAD 0.3 million in expenditures in the first year, with subsequent optional additional expenditures of CAD 1.2 million before the second anniversary and a further optional CAD2.5 million before the third anniversary of the Agreement. Northisle will be the Operator during the First Option.

If Freeport elects to proceed with the Second Option and fails to complete the expenditures required, Freeport’s interest will revert to the 49 per-cent interest as earned under the First Option.

For more information on Northisle please visit the Company’s website at www.Northisle.ca

John McClintock, P. Eng is the Qualified Person who reviewed and approved the scientific and technical disclosure in this news release.
On behalf of Northisle Copper and Gold Inc.