NorthIsle announces the positive results from a Preliminary Economic Assessment

Vancouver, B.C. – Northisle Copper and Gold Inc. (TSX-V: NCX) (“Northisle” or the “Company”) is pleased to provide an update on its 2021 exploration program for the 100% owned North Island Project. The exploration program includes a total of approximately 10,000m of drilling in 20 holes across four key targets, as well as geochemical and geological surveys in several high priority areas along the 50km extent of the North Island Project.

Sam Lee, CEO of Northisle commented, “We are now fully funded for our 2021 field program and are excited that drilling and surface exploration has now commenced at the North Island Project. With drilling targeted at Pemberton Hills, Red Dog, NW Expo and Hushamu, as well as additional surface work planned across the extent of our 50km of prospective exploration property, we have a range of opportunities to create shareholder value on the ground at any of these targeted areas.”

The initial 2021 exploration program has been approved and will test several high priority targets including drilling at Pemberton Hills, Red Dog, NW Expo and Hushamu and drill target generation at Good Speed and South Mount MacIntosh.  The Company will define additional exploration activities for the second half of 2021 based on the results from the first half of the year.

As previously disclosed, the first drilling of 2021 is at the Pemberton Hills target, where drilling is now underway. The exploration target at Pemberton is a deeply buried copper-gold porphyry deposit.

Extensive Terraspec X-ray diffraction studies of the altered rock within the zone confirm the alteration is advanced argillic and similar to that at both Hushamu and Red Dog. This type of alteration is commonly found overlying porphyry copper deposits. Further evidence of a buried porphyry copper deposit is the presence of anomalous copper at the end of a 200m deep drill hole within the altered area.

Exploration in 2018 and 2019, including scout drilling, clay studies and induced polarization chargeability anomalies helped narrow the Company’s focus to an approximately 1.5 by 1.0-kilometre portion of the larger 3.5 by 1.5-kilometre porphyry lithocap. The company has budgeted for an initial 3 holes, each having a minimum length of 600 metres. 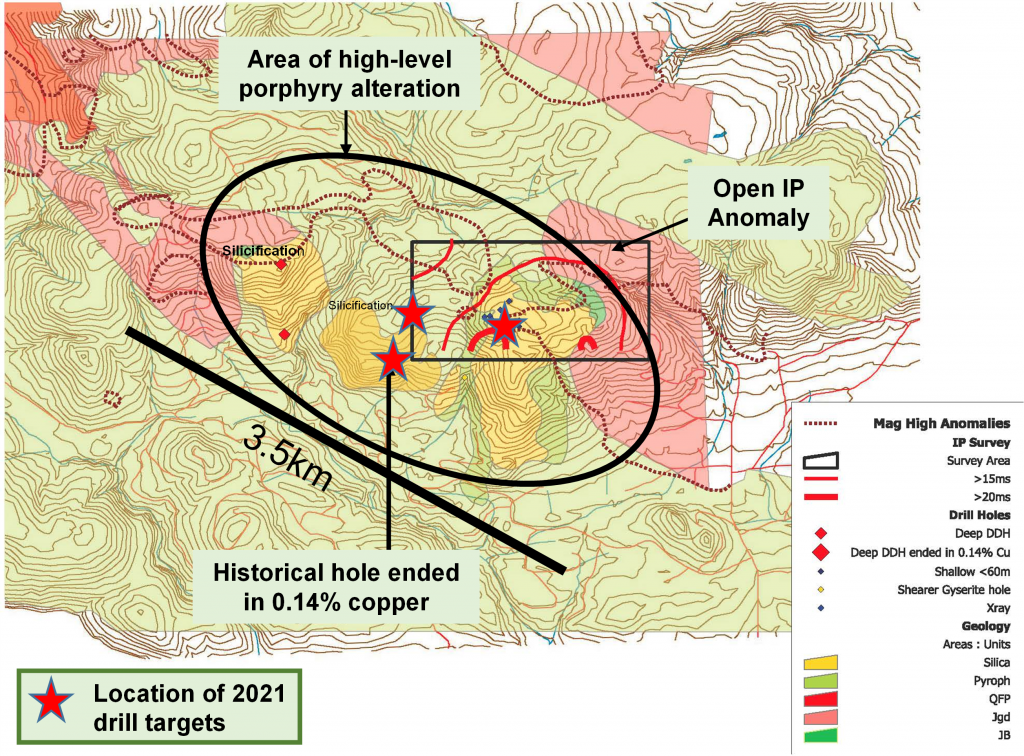 Figure 2 shows the drill being assembled at the location of the first hole of 2021.

Drilling of approximately 2,400 metres in 4 core holes will target both the northwest extension of the higher-grade Red Dog deposit and test for the down faulted south side of the deposit. The northwest extension is highlighted by a 1 km diameter induced polarization (“IP”) anomaly while the southern extension of the deposit is suggested by a broad area of high-level porphyry alteration where shallow (less than 200 metres) historical drill holes ended in mineralization with copper and gold grades in the 0.1% and 0.1 g/t range, respectively, as well as a coincident copper in soil anomaly. This program is targeted for commencement during the latter part of Q2 2021.

Exploration carried out from 2008 to 2011 identified a 1.5km long IP chargeability anomaly. Two previously drilled holes in one part of the anomaly intersected 175 metres grading 0.12% Cu and 0.09 g/t Au, and 61 metres of grading 0.16% Cu and 0.14 g/t Au.  The untested part of the anomaly will be tested with 4 holes in 2021. This program is anticipated to commence upon completion of the drilling at Red Dog during early Q3 2021. 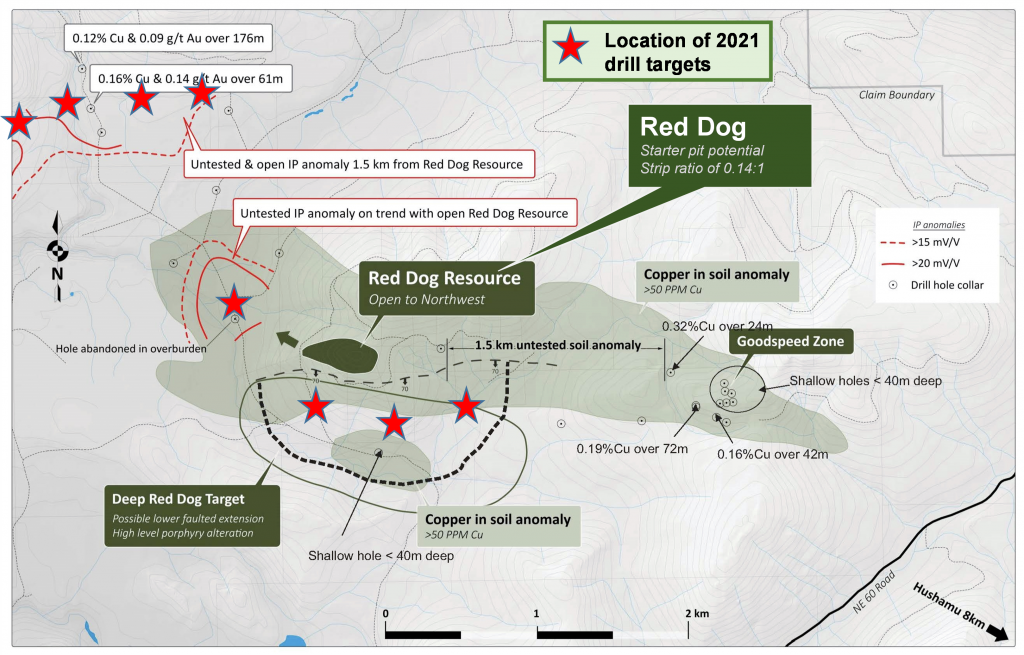 The Company has submitted a Notice of Work in respect of a multi-year exploration program for Hushamu, which includes both step-out and in-fill drilling targeted at upgrading Inferred Resources to Indicated, as well as increasing the overall mineral inventory at Hushamu in preparation for the commencement of a pre-feasibility study. The southeast and northwest ends of the deposit remain open and require additional drilling to determine the full extent. Based on surface mapping and peripheral historical holes, the southeast end of the deposit could extend for as much as 300 metres. During 2021, the immediate priority is to complete step out drilling which will demonstrate the full extent of the deposit, with 8 to 10 core holes anticipated totalling approximately 3,200 metres, as shown in Figure 4. 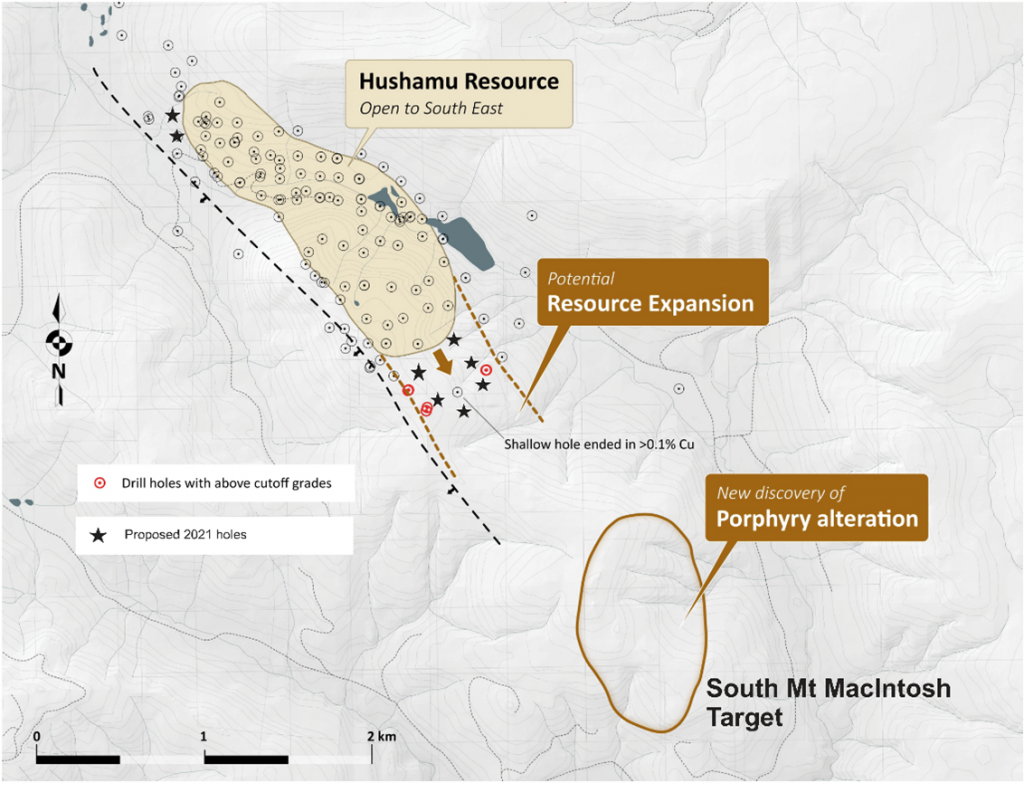 In addition to the defined drill targets there are several partially tested copper-in soil anomalies and known porphyry occurrences that require additional work to better define drill targets. Of these areas, the priorities are the Goodspeed area and South MacIntosh. The surface exploration program on the property is already underway with a soil sampling program at the Goodspeed target to the east of the Red Dog deposit. Drilling at the Goodspeed target in the 1960s and 1990s intersected encouraging copper values including 0.32% over 24 metres, 0.19% over 72 metres and 0.16% over 42m. At South MacIntosh, recent logging roads exposed a large area of previously unknown high-level porphyry alteration.

John McClintock, P.Eng, Vice President Exploration of Northisle and a Qualified Person as defined by National Instrument 43-101, has approved the scientific and technical disclosure contained in this news release.